Rep of Ireland suffer only their second defeat in 17 games. 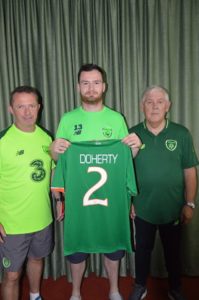 with a very disappointing 2-1 defeat to hosts Romania.

Ireland went in to
last nights game having only lost to Croatia in the 2017 Final in Turkey
and were confident of getting off to a good start.

However on a night of very few chances the Rep of Ireland failed to live up
to their ranking of number two in Europe against an efficient Romanian side
who took a two nothing lead with 15 minutes to go after some basic mistakes
by the Irish defense.

With four minutes to go Stephen Kelly pulled one back for the Republic
after some excellent work by Mark Horgan at the back post, but we never
really threatened the Romanian keeper who had very little to do all night.

The Rep of Ireland go in to Wednesday’s game needing all three points
against Slovakia and hope that England get a result against Romania.