Played in Maginn Park on Sunday afternoon in overcast conditions this was an excellent game with Aileach thoroughly deserving their success. Aileach had the first opportunity in the 5th minute after Darren McMonagle ‘s cross was chested down by Ronan Coyle to Thomas McMacken but he blazed over from fifteen yards.

A good break then by McMacken saw him feed Dermot Doherty inside the area but his effort was blocked by John G McLaughlin. Glengad s first threat came on 10 minutes when Stephen McLaughlin broke on the right and his driven cross was punched clear by Peter Devlin. On 20minutes Terence Doherty caught a defender 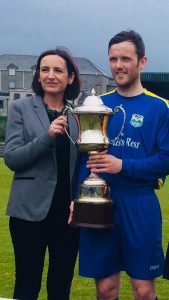 in possession on the edge of the area and his effort was deflected narrowly past Devlin’s right hand post. Glengad then saw  Michael Byrne flick a free kick goalwards  but Devlin gathered easily and from his clearance Coyle collected the ball twenty five yards out and  fired a stunning effort which clipped the outside of Kevin McLaughlin’s right hand post. But two minutes later Aileach took the lead with an excellent goal when  Darren McMonagle skipped  past a defender and unleashed a thunderous effort from the edge of the area past McLaughlin. Aileach really should have went two ahead then  on 42 minutes after Darren McMonagle’s low effort was well parried by McLaughlin but Coyle unmarked headed over from eight yards with the goal gaping. On the stroke of half time a short free on the edge of the area was played to Aileach’s Gavin Doherty but his effort was well gathered by McLaughlin. Glengad had an early chance after the break on 47 minutes when Michael Byrne flicked the ball into the path of Terence Doherty on the right but he drove wide of Devlin’s left hand post. Aileach replied and after  Dermot Doherty played a superb pass into Gareth McGlynn but his attempted chip was clawed away by McLaughlin.Glengad had a good chance from a Seamus   Doherty free which was powerfully headed across by Adam Byrne and when a defender headed out Terence Doherty stumbled as he was about to strike the ball and the chance was lost. Aileach went close again and after a good passing move Dermot Doherty saw his left footed effort blocked by the outstretched left leg of McLaughlin from just inside the area.On 65 minutes Aileach opened Glengad up again after a good spell of passing ended with Darren McMonagle picking out the inrushing McGlynn on the edge of the area  but his effort lacked the power to trouble McLaughlin. Then a Dermot Doherty cross whipped in from the left found Coyle but his glancing 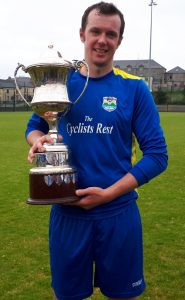 header flew straight at McLaughlin. Glengad tried to push forward   but substitute Anthony Doherty then intercepted and spread a brilliant crossfield pass  to Coyle who laid it back to Gavin Doherty but he fired over from the edge of the area. With Glengad pushing Darren McMonagle broke forward but Matthew Byrne got across to block in the last action of the game.

Without doubt Glengad produced a below par performance but Kevin McLaughlin , Matthew Byrne and John G McLaughlin played well. Aileach had a lot of good performers in Darren McMonagle, Dermot Doherty and Thomas McMacken among others. But the award goes to Aileach centre half Cathal McElhinney (Pictured Right) who did not put a foot wrong all day, snuffed out the threat of the Glengad dangerman and put in a couple of storming runs and tremendous defensive blocks. 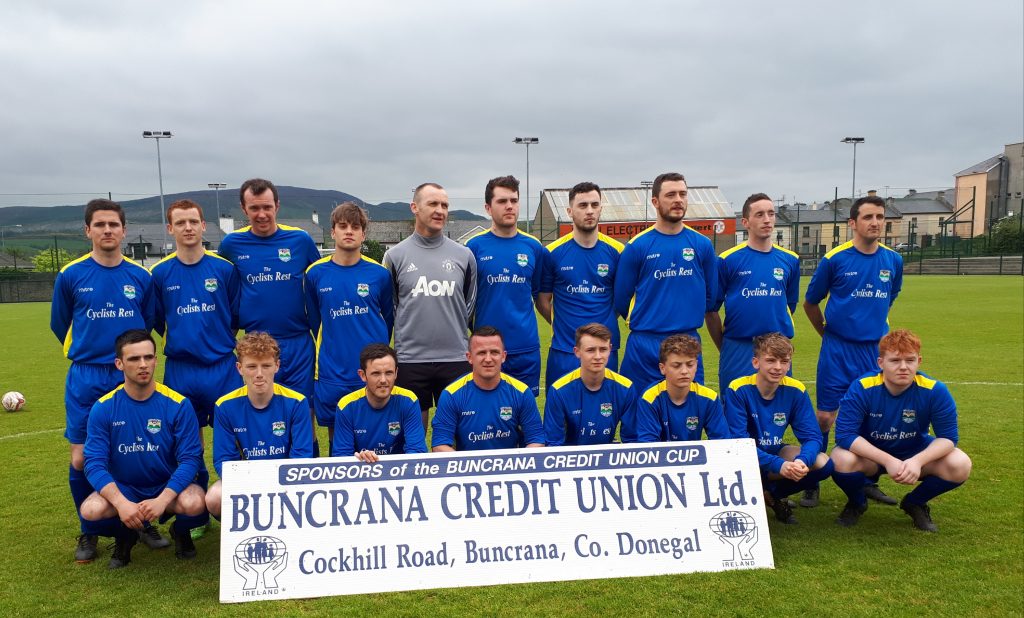